Cruise courses in Tokyo and their highlights 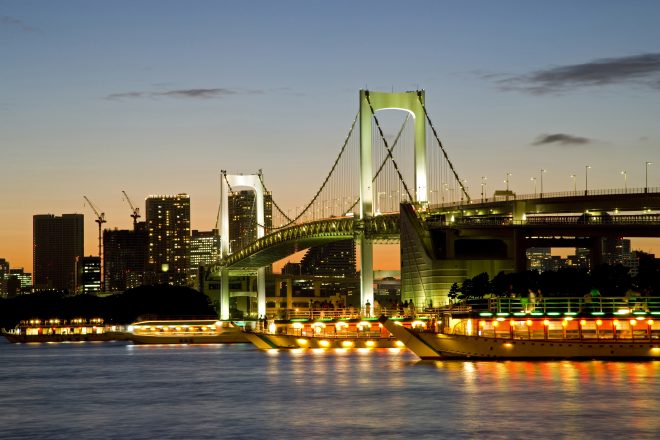 A very popular course cruising various well-known night view spots including Odaiba, Rainbow Bridge, and Tokyo Tower. We can arrange the cruising course according to the customer’s requests such as cruising to the Tennozu area or Haneda International Airport, long time mooring at Odaiba. Since there are many photo spots, you can take memorable photos.

The up north the Sumida River course 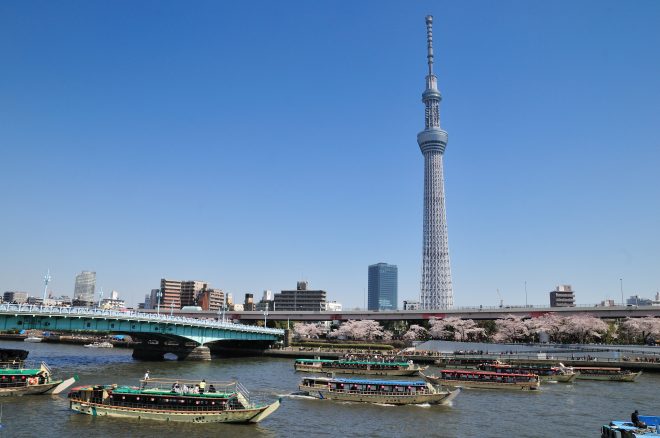 Let us introduce highlights you can enjoy during the up north the Sumida River course. There are many bridges across the Sumida River, so you will go under these bridges, which is an amazing experience. After arriving at Asakusa, you will see Sky Tree just in front of you.

※The boat may not be able to sail up to the north to Asakusa due to the tidal level. 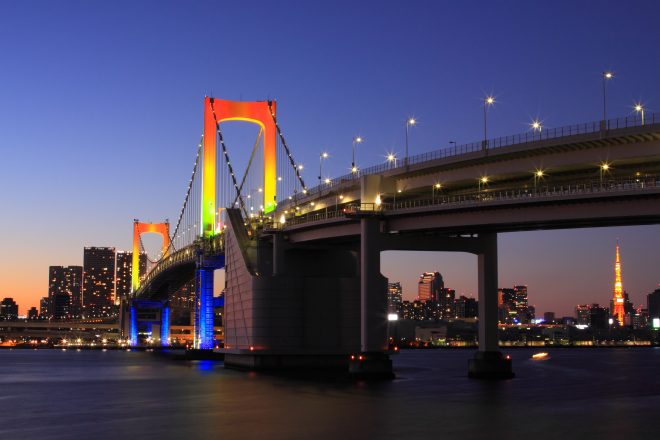 Needless to say, it is a symbol of Tokyo Bay. Its beautiful curved line can be enjoyed from far away, and sailing under the bridge will be a great experience. The illumination changes according to season. The rainbow colors in the photo are special to December. It is a staple commemorative photo spot. 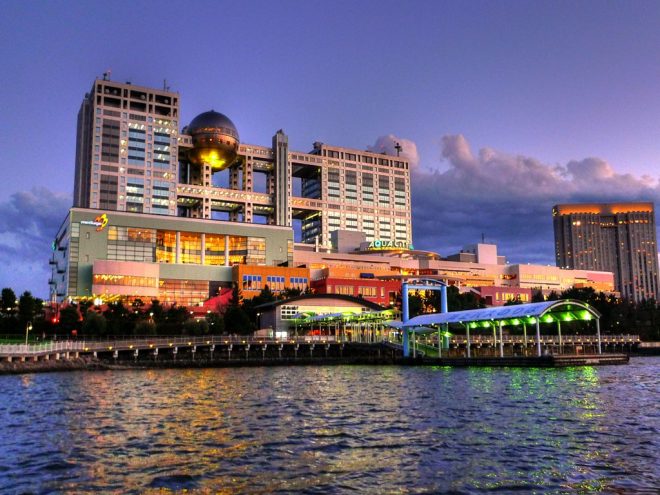 The scenery representing Odaiba is characteristic buildings such as Fuji TV and Aqua City. The sea in front of Odaiba is a mooring spot surrounded by a dike. Regardless of season, many yakatabune and cruisers moor in this area. Of course you can enjoy the beautiful night view. A commemorative photo at spot No. 2 is a staple recommendation. 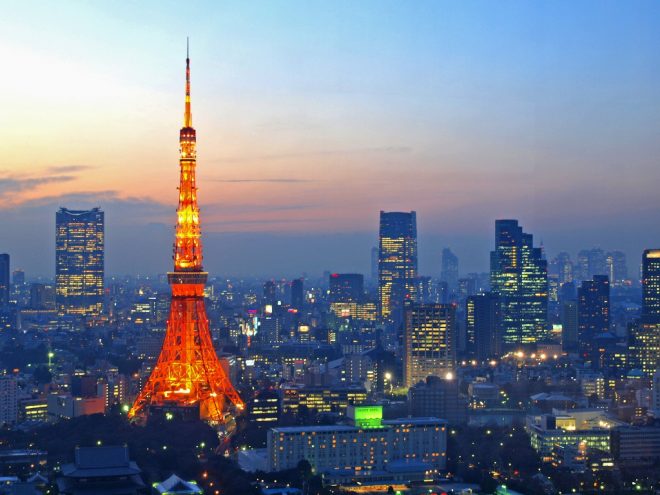 Although Sky Tree has taken its place as the symbolic tower of Tokyo, Tokyo Tower’s beautiful appearance is still loved by people. The appearance of Tokyo Tower seen from the gap between high-rise buildings still makes us happy and feel nostalgic. Its characteristic illumination that changes depending on the season entertains visitors. 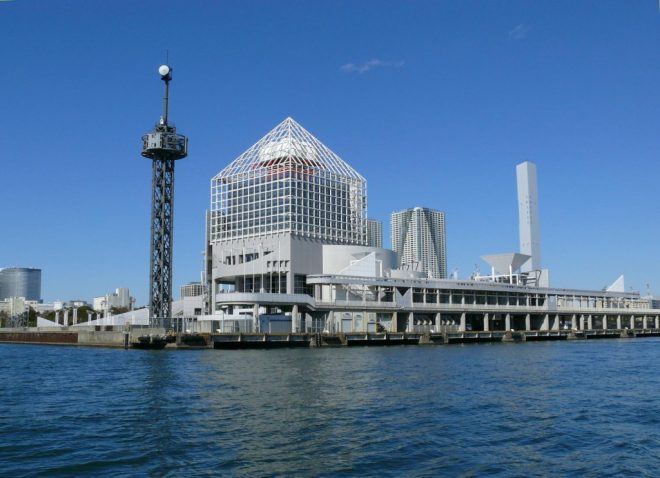 Harumi passenger boat terminal with its characteristic pyramid-shaped roof is the entrance gate of the sea to Tokyo where a number of passenger boats arrive and leave. You may have a chance to see a big-scale passenger boat closely from a yakatabune. The Olympic Village will be in the vicinity. The area is one of Tokyo’s highlights, which will be more developed in the future. 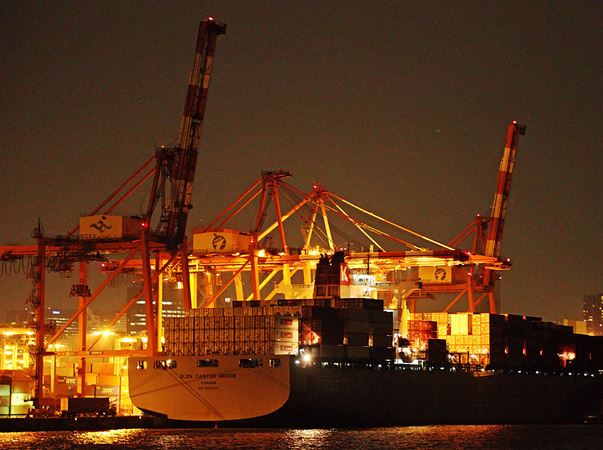 It is the largest container wharf in Tokyo Bay, with deep-water wharf with a length of 2,354 m, one of major wharfs in the world. This container wharf supports the logistics, and you can see containers loaded or uploaded with huge gantry cranes standing in a row. It is a fascinating night view spot. 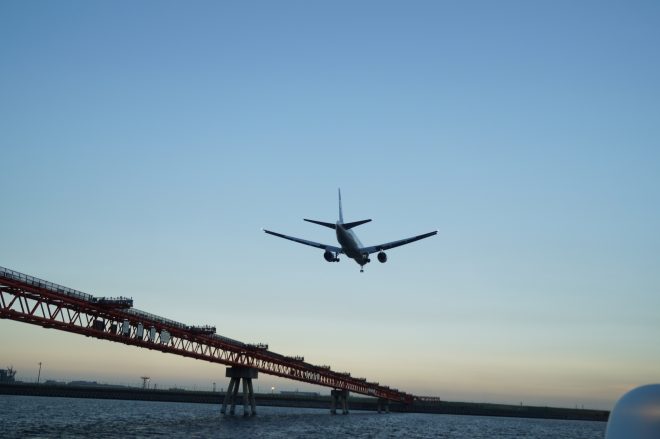 Many airplanes take off from and land at Haneda International Airport, the biggest airport in Japan, more than 600 times a day. The yakatabune will moor near the runways, so you can enjoy watching takeoffs and landings a jumbo jet closely. You may see the huge body of an airplane flying just above the yakatabune and feel the booming roar in your stomach.

Highlight spots of the up north the Sumida River course 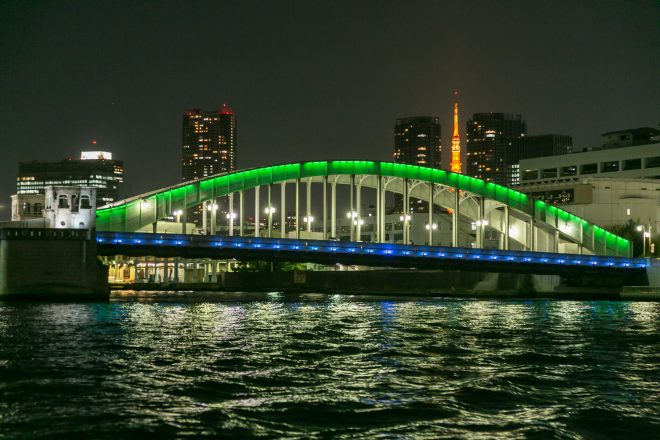 A moveable bridge across the Sumida River, with an opening in the middle, is a traditional building structure designated as an important national cultural property. It seldom opens or closes these days; however, its characteristic silhouette and impressive beautiful illumination of blue and green are loved by many people. From a yakatabune, you can see the back of the bridge. 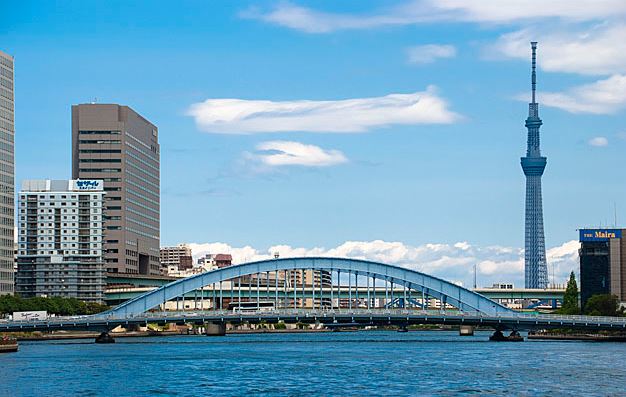 This traditional bridge was originally built in the Edo period, and the current bridge was built in the Taisho period. Their blue illumination is beautiful, and Tokyo Sky Tree can be seen behind the bridge from a yakatabune. This is also designated as an important national cultural property. 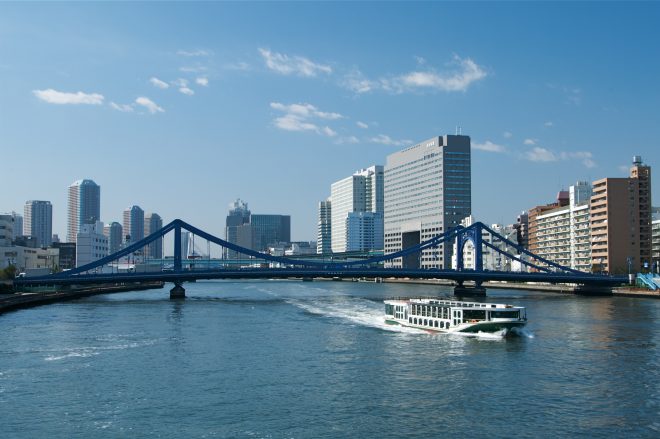 When the yakatabune sails toward north near Asakusa, you will be able to see various attractive buildings in addition to Sky Tree. Among them is the iconic Asahi Beer Headquarters and the Super Dry Hall next to it. The rooftop object is interpreted in various ways depending on who is looking at it, but it is a monument expressing a flame on a torch.

Tokyo Sky Tree, completed in 2012, is Tokyo’s symbol tower, with a height of 634 m. Yakatabune sails up north near Asakusa, the outskirts of Sky Tree, so you can see this huge tower from its bottom. Since the tower can be seen from Eitai Bridge across the Sumida River from time to time, please enjoy the size of the tower, which gradually looks larger as the boat sails near Sky Tree.